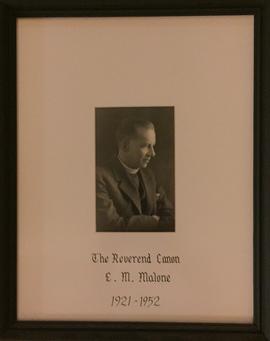 The photograph shows a head and shoulders portrait of Canon E. M. Malone.

Canon Malone was a prolific writer; included in the archives are manuscripts and published versions of many of his works. Among his archives are also detailed list of parishioners serving in the armed forces during both the First World War and Second World War, along with copies of published and unpublished war-time prayers used during both wars.

Among the issues or topics referred to in the E. M. Malone Archives are the following: catechisms; communion; the Church of England in Canada; the Eikon Basilike; the foundations of St. Peter's Cathedral; Punch Magazine; Barbados; Antigua; Queen's College; Dalhousie University; The Book of Common Prayer; Margaret Hegan Malone (Canon Malone's second wife); World War II; requiem masses and lists of members of the congregation serving in the military; Diocese of Nova Scotia. See the file list for details about these different issues or topics, as reflected in the file titles in the list.