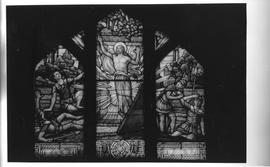 The photograph shows a stained glass window in St. Peter's Cathedral depicting the Ascension The accompanying information sheet says the window is a "Memorial to George H Peake and Edith A Peake."

The photograph shows the interior of St. Peter's Cathedral and the rood screen. The screen was apparently designed by William Critchlow Harris while he was an apprentice to the architect David Stirling at the office of Stirling Dewar in Halifax. There are chairs at the edge of the photo which dates the picture to prior to 1926.

The photograph, which appears to have been taken from the balcony, shows an overhead view of a procession taking place in St. Peter's Cathedral.