The sixteen photographs show the interior of St. Peter's Cathedral being painted, from various angles. The different shots show different unnamed workers, as well as the risers and painting equipment. Only images 0236 A-F have been scanned. 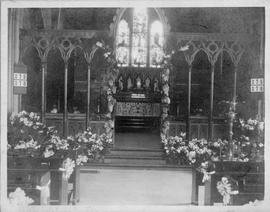 The photographs show the interior of St. Peter's Cathedral, showing the altar and extensive flower arrangements. Pews are present so the picture must have been taken after 1926.