The photographs show four perspectives of Queen Elizabeth and Prince Phillip in a vehicle with an RCMP officer at the wheel and another law-enforcement official in the front passenger seat. The group is arriving at Victoria Park while a crowd looks on. The visit took place in 1973, on the centennial of Prince Edward Island's entry into Confederation. Accompanying information for these images and related photos PHOTO 0221 indicate that Archdeacon S. Tanton preached the sermon as the event was broadcast on national and international television. 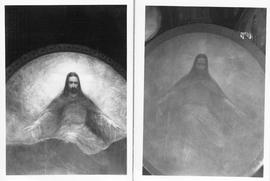