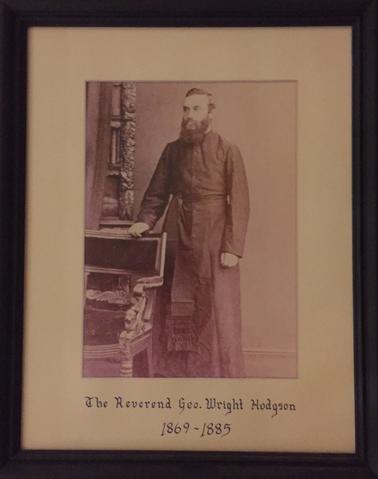 George Wright Hodgson was born in Charlottetown, Prince Edward Island, on 15 January 1842, the son of Daniel Hodgson and Mary Cambridge Wright and younger brother of Edward Jarvis Hodgson. George was baptized on 24 August 1842 in St. Paul's Anglican Church in Charlottetown.

George studied at King's College in Windsor, Nova Scotia, becoming a firm supporter of the Anglo-Catholic Oxford Movement. He was the first Reverend of St. Peter's Cathedral, in Charlottetown, in 1869; the church had been built in 1867 and held its first service, under his direction, in 1869.

George married Gertrude Magdalene DesBrisay on 4 March 1884. He died on 20 July 1885 at the age of 43 and is buried at the St. Peter's churchyard in Charlottetown.

This photograph is oversized/framed. Original is held in the church office.