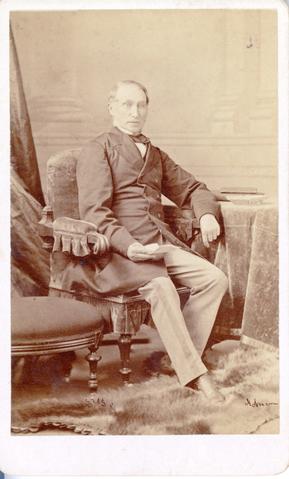 According to biographical information on the Memory P.E.I. website, Daniel Hodgson was born on 4 October 1803, in Charlottetown, Prince Edward Island, to Robert Hodgson and Rebecca Robinson, formerly of Surrey, England. Daniel married three times. His first wife was Lydia Cambridge MacGowan, who he married on 22 November 1832. Lydia died three years later, on 18 May 1835, at the age of twenty five. On 31 January 1839, Daniel married Mary Wright. They had two sons, Edward Jarvis, born on 29 July 1840 and George Wright, born on 15 January 1842. Mary died less then a month after the birth of George, on 3 February 1842, at the age of twenty seven. Daniel married for the third time to Margaret Leah De St. Croix on the 20 April 1852. She died on 18 January 1878 at age seventy two.

In 1830, Daniel became the chief coroner for Prince Edward Island. Throughout his life he served in several government and public service positions, including: Lloyd's agent for Prince Edward Island in 1831; Prothonotary and Clerk of the Crown in 1839; Judge of Probate in 1853; Commissioner for issuing treasury notes, Commissioner for affidavits in the Supreme Court, and Clerk of the Crown for Justices of the Peace throughout Prince Edward Island in 1864. Outside of his professional duties, Daniel also belonged to the Library Society as of 1832, and is recorded as a church warden for St. Peter's Anglican Church as of 1845. Daniel Hodgson died on 21 July 1883 at age eighty.